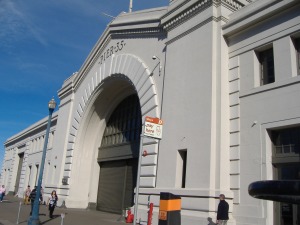 Alphonso Rhodes, owner of AJS Painting & Decorating, doesn’t like turning down jobs. But that’s exactly what happened when he got offers for big projects that needed bonding that were over his capacity.

But everything changed when he bid on a project for a million-dollar water plant project in San Bruno. with Keiwiet Infrastructure. They liked his company, which he started in 2001, but they told him they needed a bond.

Something clicked for Rhodes. He had known about the San Francisco Bond Assistance Program for a long time through his network, but never really needed to apply. Now he did.

He applied, was accepted, and got the job. He got paid, and got to work. It was his first bond. A little procrastination aside, he says that the process was relatively quick and easy. The folks at the Bond Assistance Program not only made things easy, but also helped him better understand his contract, working out details on topics like liquidated damage.

He started the four-year job in December 2012, and plans to hire at least two more employees in the near future. “It’s a beginning, a new birth,” he said. “I was like a little kid waiting for the paperwork to come in, and when I got it, it was like Christmas,” he says.

The bonding has already helped him tremendously. And he’s confident that it will keep paying off. “If you want to make it out here with the big boys, you have to get one,” he says, noting that it will help him with bidding on a job as a prime. “I can bid on other jobs that I’ve been turning down.”